Report from the open day at Mendeley HQ

I was lucky enough to be invited again down to Mendeley’s HQ for their yearly ‘open doors’ big day out for advisors and keen fans of the platform. This year was a much smaller affair with about 30 Mendelers (is that what we’re called?), right in the heart of their North London offices. In addition, whereas last year was about forming us into groups to move around and spend time with their experts in a rooftop setting above Mendeley HQ as well as get our feedback, this year was obviously about the Elsevier purchase, what future plans Mendeley has in store, what we thought as users and advisors, the many APIs that had appeared in recent years and finally Lego.

The day began with pastries and refreshments as per last year but the big difference is that we were all right in the middle of their exciting and vibrant office space. Following a refuelling we took our seats at the other end of the open-plan office in their ‘Research Hub Area’ and watched a presentation from one of the co-founders Victor Henning. Victor gave a brief history of the company and talked about the recent purchase by Elsevier and the many reasons behind it. He concluded by giving us some indications of where their future lies and despite the negative feedback they received after the take-over, the future looked very good for all concerned. Obviously that’s not to say a positive spin is always the way forward when a company takes a turn like this, especially to be purchased by a company that many in the academic community heavily mistrust. Nevertheless I decided when the takeover happened that I would remain optimistic as to the software’s future and that of the Altmetrics movement. Headlines such as The Empire acquires the rebel alliance, were quite apt in the big scheme of things but it is still early days as to what the real effects will be. I equated the situation to that of football fans in England and elsewhere, in that at times their club may do something they really do not like, appoint a certain manager or get taken over by a  larger entity. All too often you hear fans bemoaning the situation on football radio talk shows saying how they will give up their season ticket or never go again. Invariably they do, and sooner than most would openly admit. Mendeley may not have the same level of passionate fan devotion as football, but it is loved by academics, librarians and teachers.

Going back to the earlier issue of the purchase, I think at this stage of the game it is still too early to say whether the purchase is a good or bad thing for the academic community. It is a good thing in that it has brought the topic of open-access publishing, Altmetrics and open-data to a larger audience and widened the conversation. As for Mendeley and their investors it is also a good thing as a lot of money had been ploughed into the software and at some point a return was needed as with all ventures like this, there is rent to pay and staff salaries, and Mendeley do employ a good number of people. 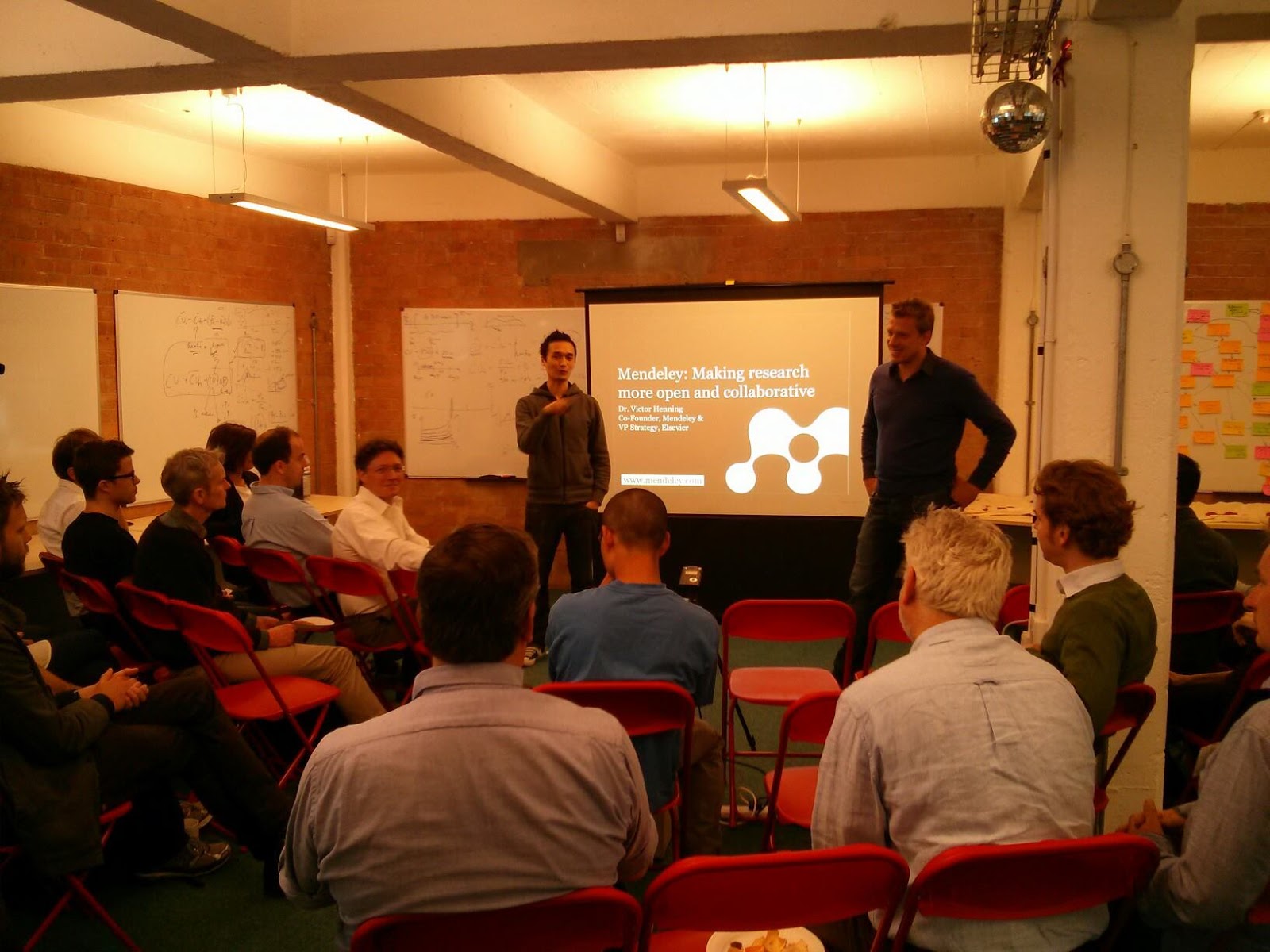 Victor and Jan from Mendeley, William Gunn is sitting down looking back at the camera. I'm poking my nose in from the right-hand side.
Image © Mendeley.com

Talking to Community Tech Developer for Mendeley Ricardo Vidal in the break it was obvious that the takeover had not been taken lightly and that the team had been well prepared and ready for the flak that would follow from the Mendeley community. They knew they would have to deal with upset users who felt they were betrayed, but felt that the level of criticism could have been worse than what they received. Nevertheless a lot of effort was put into allaying user’s fears.

The next session delivered by Victor focused on the Mendeley Roadmap and integration with Elsevier and was part delivered by one of Elsevier’s staff. One of the main features of Mendeley and potentially its greatest selling point is the huge number of papers and references now stored in the user’s databases. This is an area that Mendeley are working alot on to help users navigate the collection more easily and find relevant papers. Already, those paying a premium can get the ‘suggested paper’ option that is very much based on the Amazon model of identifying potential purchases based on existing ones. One of the questions raised by an advisor was whether searching for references in the database would now be biased to bring Elsevier papers first, a claim that has been banded at Google for their own products, despite denying such a tactic. The Elsevier representative responded by saying that this would not be the case and as before the most relevant papers, regardless of publisher, would appear first.

At lunch I chatted with Mendeley President and Co-Founder Jan Reichelt who maintained the message that Mendeley would remain an open community and share ideas and innovation throughout the research community. The message coming from all of the people at Mendeley HQ that day was that things will continue as they are. Until Elsevier does differently it is hard to criticise that stance. 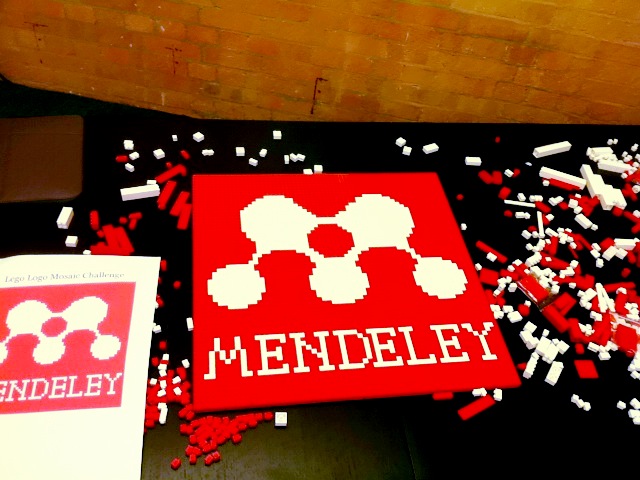 Following a very good lunch, (well when is a free one ever that bad) some of us retired to one of the breakout rooms to work on the large Mendeley Lego model. A few of us remained until it was complete, even holding up the post-lunch presentations slightly. One big change from last year’s open day was the presentations from Mendeley API developers of which there is a growing community. Victor and Ricardo explained to me that now Mendeley had become established as a product and company that its real value was in its data. That being the millions of references saved on the platform, as a result meaning they were happy to make their code sharable for others to replicate and create their own applications. This openness has allowed many other developers from around the world to create their own APIs and working products. On show were a few of these tools, alongside their developers. One of these was Plasmid.io- an iPhone App that allows scientists to obtain, manage and share plasmids wherever they are. As for that last sentence, I’m just going to pretend I understand it. Also from Germany was one of the co-founders of Labfolder Dr. Florian Hauer. Labfolder is a platform that allows researchers working in a lab to keep all of their content and ideas in one place.

The next breakout session was titled Group Therapy and Blue Sky Thinking and gave the attendees a chance to share ideas of things they wanted to see improved or added to the platform. My long-standing request for a log-out button on the desktop version came to light again as well as my suggestion for the application to be even more social, with more social media buttons for sharing research. I also suggested that Mendeley investigate the idea of CWYW functions within Cloud based document tools such as Google Docs. Themes were found in the groups, including a better search function and more options for importing references, such as placing them in multiple folders in one go, which were fed back to Ricardo and Jess Mezei. At the end of the session there were dozens of ideas and suggestion scribbled down on post-it notes giving Mendeley’s tech-heads even more work.
15-minute presentations were then given by Mendeley’s Head of Academic Outreach William Gunn, who looked very different from his profile picture, and from Ricardo Vidal. In addition there was a presentation from the Mendeley Support Team on what goes on when Mendeley misbehaves for you.

The day was topped off by showing the work that has been going on with regards to grant research projects and emerging trends. Finally the team previewed a short promotional, and at times comical, video of various Mendeley users from around the globe expressing what Mendeley means for them. There was even more food and drinks with a fine selection of sushi before I headed off to my train and back up North to home.

Now at this point you might think I’ve been paid to write a long list of plaudits for the company- OK I might be slightly won over by free food, drinks and a mug, but the reality for me is this.
Out of the thousands of Web applications and tools that have appeared since the Web 2.0 activation in 2005 only a small proportion of productivity tools really have stood out as being groundbreaking. In that group we can list DropBox, Twitter, Google Docs, Prezi, Evernote, Skype amongst a few other notables. Mendeley can be listed in that elite collection, for several reasons. Firstly it works well, it gives you what you want from a reference management software package, and compared to the existing platforms it was evident that the inventors had gone back to the drawing board and come back with something they felt they could use. Alongside other notable reference management tools that have tried to achieve the same, such as CiteUlike, Zotero and Connotea, they realised that academics were starting to work in different ways, on the Web, storing papers and using mobile devices more. The existing packages they had rested on their laurels too long, hence why Google released Google Docs after watching Microsoft Word slowly evolve and fall behind the times with MS Office. This is not to say that every new idea is perfect, most software has some kind of limitation. Again another reason why Mendeley worked and gained a fan base was to talk to its users and find out what worked and what didn’t, and in addition ask the question: “What do you want adding?”

In the five or so years since Mendeley’s launch it has continued to grow and develop, obviously so much so that it gained the attention of the publishing giant Elsevier. I’ve never been part of a technology start-up, but I can imagine that the reasons for doing so are a mixture of these things: to create something that was needed by people (even though they did not realise they needed it), to make something that you cannot get from another tool, to make a living, to change the way we think and work and advance our knowledge, to be altruistic. I don’t know all of reasons behind why three guys made Mendeley, but I think they would be a mixture of the above and if that is the case they have achieved that, clearly. Obviously there are those who will always believe they sold out, and will look elsewhere for their technology. For me personally it has given me a tool that I have taught to hundreds of students, mostly from developing countries, that has allowed them to form networks, find research and carry out their own study much easier; and invariably without cost. The fight to bring Altmetrics into the academic debate has shown no sign of weakening, and if anything Mendeley has highlighted the issue. These alone are reasons enough to stick with this platform that is still, above all - open.

Posted by Andy Tattersall at 12:10