The blog was first set-up in 2007 and is aimed at fellow colleagues in the worlds of health information and higher education, with many of the posts being relevant to the work of academics more generally. There is often a focus on new technologies and social media platforms, as well as recent and upcoming work undertaken by IR.

Amongst the 107,000, we have received the most ‘page views’ from the following countries:
The top five most highly read blog posts since it all began in 2007 are:

In addition to the blog, we have a dedicated Information Resources Twitter account (@scharrlib), which focuses on the latest developments in health and information science. If you're yet to set yourself up with a Twitter account but think you might be interested in the information we post, you can visit the following page and sign-up for our free daily newspaper via paper.li. Or you could simply visit the page to view the latest content: http://paper.li/scharrlib/1338371438. Not convinced about the benefits of Twitter? Why not read the following blog post by Andy Tattersall about 7 new ways to work in 2013, where you will find a useful overview of the benefits of Twitter in academia.

We also have a YouTube channel called scharrvids, where you will find a whole host of tutorials on subjects such as online reference management tools and useful searching techniques. There is an option to subscribe available from the main page, so you need never miss out on a new video!

We're thrilled that the blog has continued to be so popular over the years, especially since so many new platforms and tools have become available in the years since it was first launched. A big thank you to everyone who has supported the blog over the years, by contributing to it, reading it, commenting on it and sharing the content with colleagues.

The theme of this year's conference was "Opportunities and challenges for academic development in a post-digital age". From my discussions with other delegates I sense that this was perhaps the first time that this conference had pitched itself fairly and squarely at issues relating to educational technology.

The opening speaker Grainne Conole did a brilliant job of mapping the history of the development of educational technology and particularly innovations such as MOOCs and Open Educational Resources. It was reassuring to be in the presence of both a speaker and an audience who feel positively about these topics and have a more optimistic mindset towards them.

There was a fantastic choice of parallel sessions, and the first I chose to attend was by Kathryn James. The focus was on a topic related to her PhD work, "Rhetoric and reality: The drive of learning technology and its implications for academic development". Catherine talked through the tensions and pressure points that surround academic use of learning technologies, and allowed us to chat on our tables- I was sat with a really nice group we had a really interesting discussion about the tools we use and the challenges we face in engaging academic staff with them- 'a trouble shared..' and all that!

The next session I chose was by Rebecca Dearden and was entitled "Working in a "third space" to create an institutional framework to underpin use of audio and video".  Rebecca talked about a project she had led which looked at the legal and privacy issues related to lecture-capture at Leeds University. She gave a really interesting presentation that showed how serendipity, willingness to work in all kinds of physical and virtual spaces, and teamwork can really pay off and deliver results in moving forward institutional policy.

After lunch, my third parallel session was entitled "A "menu" of teaching approaches to transform engagement with technology-enhanced learning", by Stuart Hepplestone and Ian Glover of Sheffield Hallam University. They discussed how they had developed a menu tool for helping academic staff to identify appropriate technologies to embed in their learning in teaching and access case studies demonstrating how these technologies can be effectively used. The session also demonstrated a kind of "diagnostic" tool that allows academic staff to identify where within their existing learning and teaching activity the opportunities to use technology might lie.

Finally, after a networking break, it was time for my workshop on using audio to deliver feedback. I was worried that the topic might not appeal, but I needn't have done, as around 20 people attended my session. I demonstrated how I have used audio and what I have found to be the benefits and advantages for both myself and my students. We also looked at the many free and low-cost tools available to deliver audio feedback, and the risks and challenges of maintaining security and privacy for students when sharing and storing audio feedback.

Many of the attendees had attempted audio feedback themselves and those that had were really enthusiastic. Those that hadn't seem to leave full of enthusiasm for the subject, and three people approached me afterwards to say they would definitely try audio feedback in the future. My slideshow presentation is above.

Overall I really enjoyed the conference, and ended up wishing I had booked for both days. I will next year! 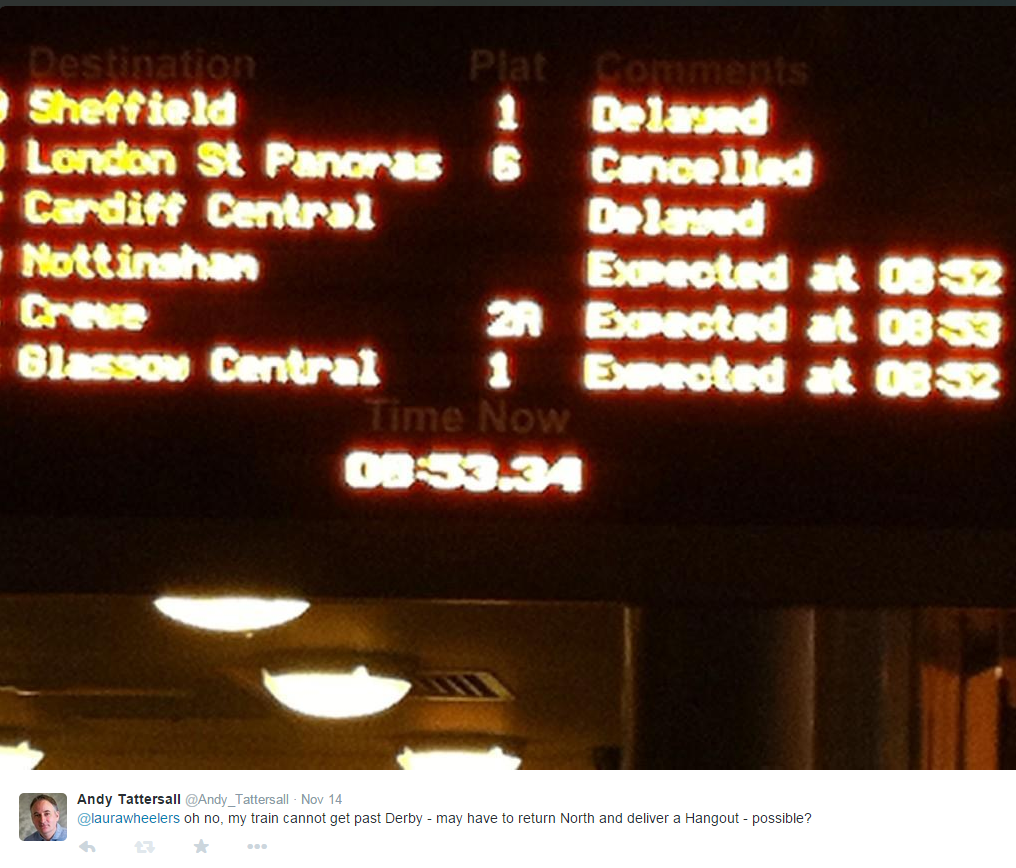 Last week I was lucky enough to be invited to deliver a talk at the Nature Publishing hosted Spot On Conference at The Wellcome Trust in London to talk about my experience of using technologies to help academics communicate and build their scholarly profiles. I was delivering a short presentation as part of the parallel session ‘Measuring social impact - the tools available and whose responsibility is it?’.

I was looking forward to speaking as it was an opportunity to meet in person my journalist collaborator from my recent The Conversation piece on post-publication peer review, Akshat Rathi, as well as Charlie Rapple from Kudos and Jean Lui from Altmetric.com.

Sadly it was not to be, as I left my home in Chesterfield at 7.30am, little did I know that I would be back in my conservatory three and a half hours later. In the end it turns out to be a good experiment into how technology can resolve such problems as a serious signals failure at Derby Train Station. As my train was cancelled at this important network junction and with it every other train heading north and south I made the executive decision to head back home and hopefully make my allotted slot at 11am.

Firstly Twitter came to my aid as I Tweeted that I was unlikely to make it to the conference, to which I got an immediate reply from the organisers. I was able to request a direct message on Twitter from my contact at Spot On requesting their mobile number, which I got within minutes and from there I was able to put them in the picture as to my predicament. My only option was to head north-west to Matlock via a train that stopped at a multitude of small Derbyshire villages. I rang my wife asking that she would pick me up from Matlock and take me home- it all felt very Jack Bauer from the series 24 (well almost). My decision to return home was justified when I spoke later to a colleague who had pushed onto London via Euston and arrived at 12, meaning I would have missed my presentation slot. Years of train commuting has taught me when to stick or twist.

I got back for just after 11 and hooked up with Spot On via Google Hangout and was given time at the end to present. This brought about another opportunity as my slides were being delivered on Google Drive - I had long ditched Powerpoint and USBs for presentations about four years ago and it paid off. Given my talk was about technology and aiding researchers to go about their work more productively it allowed me to update the slides on the fly. That morning I had received an email from an editor of the peer-reviewed journal asking me to write a paper for a special issue based on a blog post I had written. So this was last minute proof on how the system can be flipped via the use of social technologies. It also highlighted how presentations can be amended to reflect last minute change without the good old USB stick. It reminded me also that sometimes wifi can throw in the occasional spanner to these techniques, but it should not always stop you. I remember presenting at CILIP back in 2012 using my Chromebook to present something in Google Drive when they had a powercut and the wifi went down. This could have spelt the end for my presentation, but I remembered seeing someone set up a wifi hotspot using their phone and hey presto! the show was back on the road.

So back to Spot On, another glitch appeared when I was told via Hangout Chat that the presenter’s laptop would not be able to host it on the screen, so we instantly switched to Skype. I was then able to appear on the screen and deliver my slides remotely. As for the presentation it was titled ‘Altmetrics and Other Fads -  Helping Researchers Through the Social, Technology and Innovation Maze’. Despite the rather flippant title it was not intended as such but highlights the constant change of technology and how many in academia are wary to engage with those at the cutting edge. This is understandable as technologies come and go and all too often they don’t always do what you want. The idea behind the presentation was that researchers and students need guidance in discovering, learning and using many new technologies. If teachers have a pedagogy as their reason to engage with technology, what do researchers have?
It was a shame that I was unable to attend Spot On as it looked a very engaging two day conference, you can view the Twitter feed here for more information https://twitter.com/hashtag/solo14
http://www.nature.com/spoton/

Here are my slides from the conference.

Altmetrics and other fads - Spot On 14 Conference from Andrew Tattersall

Posted by Andy Tattersall at 17:06 No comments: