No Library, Information Specialist is an Island - CILIP MmIT AGM and Technology Talks

On the 17th December CILIP's Multimedia and Information Technology Committee met for their quarterly meeting and yearly AGM at CILIP Headquarters.
The morning started with our usual two hour meeting where we discussed everything from our journal to next year's conference in Sheffield which will be on the exciting theme of Sound & Vision.
We were also lucky to be visited by Anthony Thompson who was one of the committee's longest serving members going back to the 1970s and a member of the journal's editorial board. After lunch guest speakers and Annual General Meeting attendees joined us for our AGM and three talks.

The three speakers, Nick Woolley Head of Academic Library Services, Northumbria University, and CILIP Vice President Barbara Band Head of Library and Resources at The Emmbrook School and finally myself as MmIT Secretary . All three speakers presented their views on the current issues and developments in library technology under the theme: The Changing Landscape of Library Technologies: Implications for the Library.

I started the presentations talking about the work of myself and colleagues at ScHARR and the drive to take advantage of the technologies afforded to them at the University of Sheffield. My presentation is below on Prezi.

Nick Woolley captured his extensive experience and talked about the connectivity of the library, connecting users with their library on and off campus using such as near-field communication and RFID. Nick touched on the various new developments that are helping shape his library's future including augmented reality, QR codes, MOOCs and the aforementioned near-field communications. The thing that under-pinned Nick's excellent presentation, as with Barbara and my presentations was the idea that technology should not purely determine how learning and library services are delivered, rather enhance them and their user's experiences.

Barbara Band finished the trio of talks speaking about her experiences of school libraries and in particular her own at The Emmbrook School. Again like Nick and myself talked about her drive as a keen advocate of technology but also wary of their misuses. Barbara spoke of her concerns about the increasing desire to put investment into technologies for schools at the expense of libraries and teaching information literacy. I felt that the sessions raised as many questions as they answered potentially, including mine, and answers that in time will need tackling. Issues over whether we are using technologies for the sake of it, at the expense of pedagogy, that information literacy plays a major role in this shift and if neglected could unravel the whole thing. Yet the real positive is that myself and the two speakers are just a tiny part of a huge collective of proactive bodies in the library and information sector that are considering and tackling these challenges.
I thoroughly enjoyed listening to both speakers, and usually I like to send the odd Tweet or take notes at such events, but bar a solitary Tweet I was totally in tune with the speakers hanging on every word (a rarity for many in these days of diminished attention spans)

Posted by Andy Tattersall at 20:49 No comments:

On Monday (9th December) the University of Sheffield launched their own iTunesU platform with over 100 podcasts and videos from across the University. Amongst the many brilliant videos focusing on mathematics, history and dentistry we have two collections of our own. Firstly the series of screencasts Andy Tattersall created for staff and students to teach themselves the benefits of Mendeley. Secondly some of the more recent ScHARR Bite Size series - where academics and students get to learn about something new in 20 minutes (or so) on the topics of research skills, technologies and teaching.
A third collection will appear very soon which will cover information and research skills. To access the University's collections search for 'University of Sheffield' on iTunesU or discover the ScHARR ones via the links below.
Enjoy 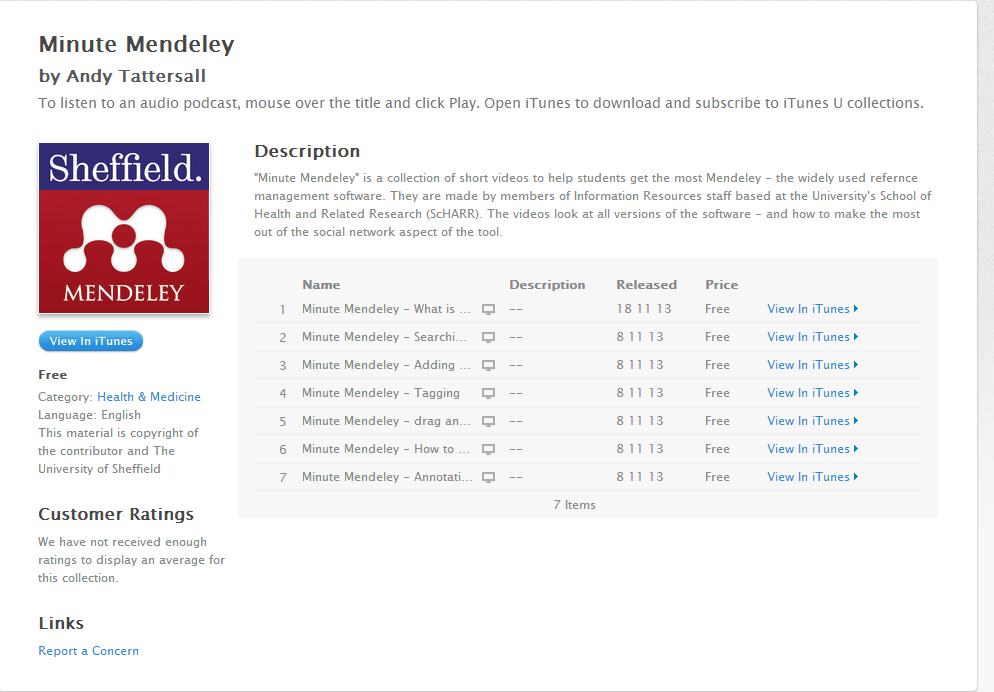 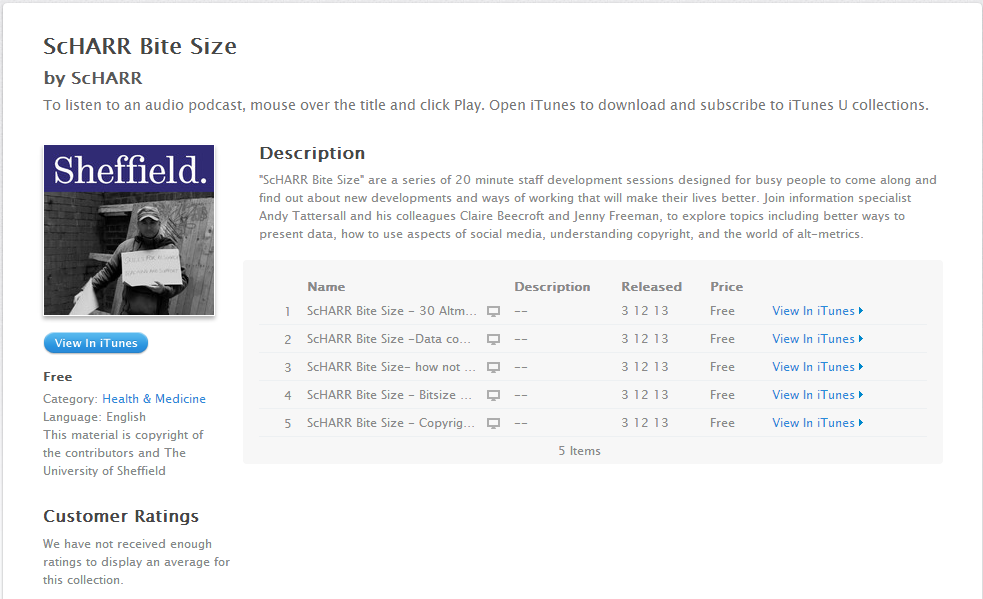 Posted by Andy Tattersall at 14:34 No comments:

Today sees the IR gang set off on out annual Christmas 'do' this year with added 'walk'. We are walking from Bakewell to Hassop Station Cafe for 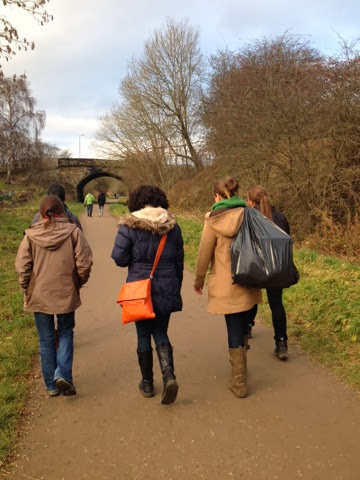 lunch then back to Bakewell for drinks. Secret Santa rides again this year with a eye watering £8 budget, and yes, that's santa's sack on Claire's back. Happy Christmas!
Posted by Unknown at 13:56 No comments:

Joy to the world! It's the IR online advent calendar! 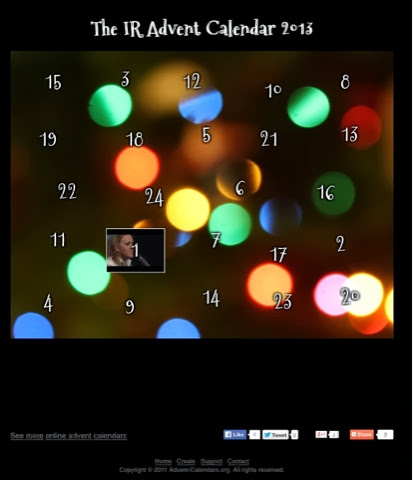 You may not know this, but every year the IR team produces an online advent calendar for the staff here at ScHARR Towers. Every day there is a lovely, Christmassy video to enjoy… and the good news is, this year, being the kind souls that we are, we are making it available to the whole wide world! You can find it here: http://goo.gl/v2PX9o do you let us know if you like it!
Posted by Claire.
Posted by Unknown at 13:53 No comments: 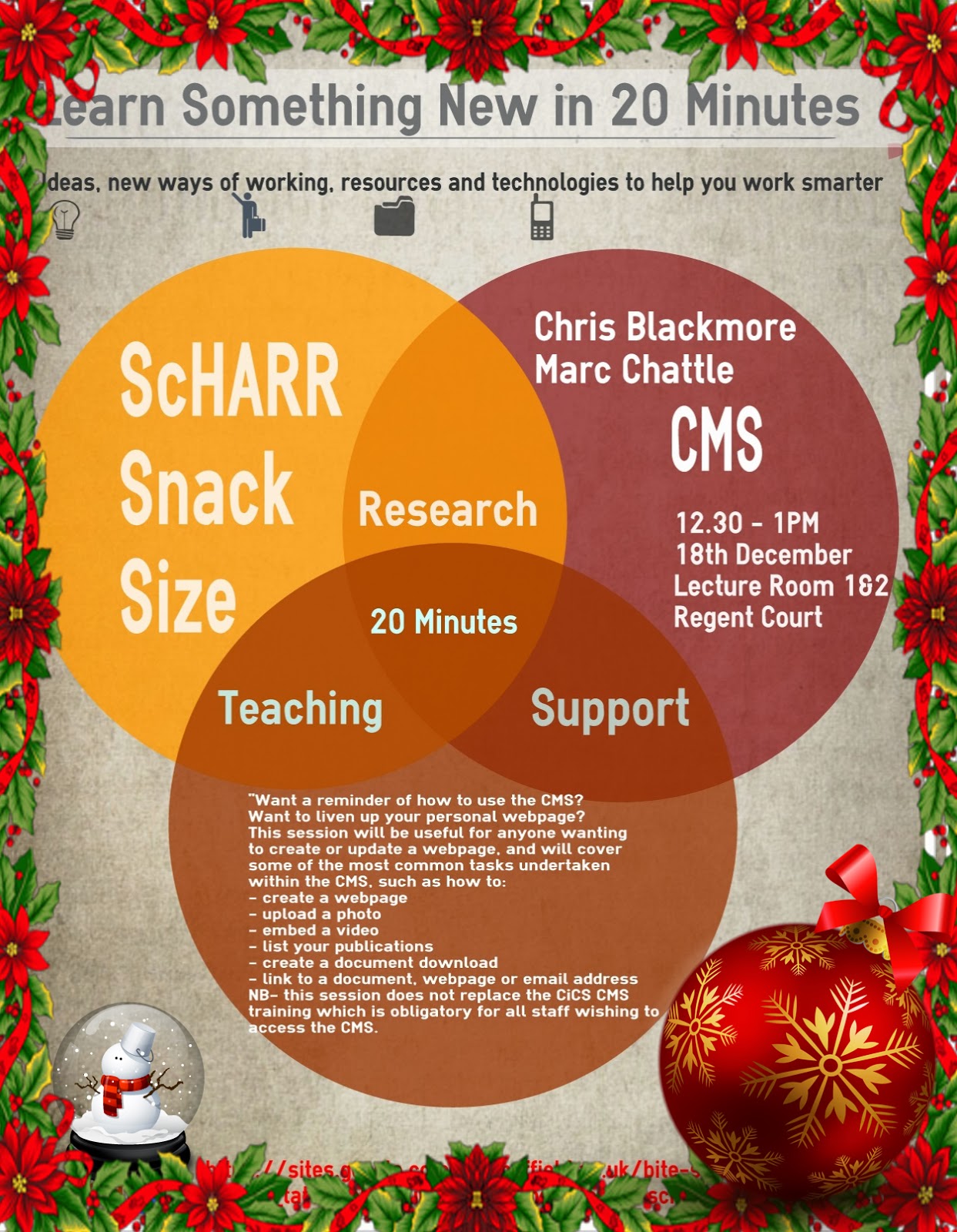 Want a reminder of how to use the CMS? Want to liven up your personal webpage? This session will be useful for anyone wanting to create or update a webpage, and will cover some of the most common tasks undertaken within the CMS, such as how to:

- create a webpage
- upload a photo
- embed a video
- list your publications
- create a document download
- link to a document, webpage or email address

NB- this session does not replace the CiCS CMS training which is obligatory for all staff wishing to access the CMS.

Posted by Andy Tattersall at 13:25 No comments: