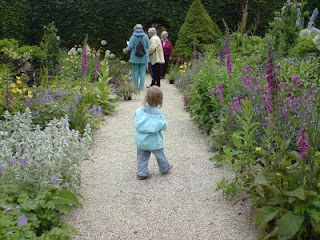 Photo and Posted by Andy
Many of you know that I bring my dog Thatcher (yes her real name) into work each year to raise money for The Blue Cross Pet Charity. This year, I can't bring her in due to work commitments on the 16th, so instead will be taking her, and my wife Suzanne and two-year-old Isobel on The Alzheimer's Society's Memory Walk in aid of those caring for people with dementia. I'm also aware you can only ask for money once a year, unless you are Bob f'ing Geldof.

We will undertake one of the many Memory Walks taking place this month organised by The Alzheimer's Society - and will be doing the organised three mile walk from Hassop Station along the Monsal Trail. To be honest, it is not much of an ordeal is it? but I will ensure that my little girl walks the three miles there and back, or I will carry her - I promise not to use a buggy. If I think of any other ways to make it harder for myself I will - suggestions on a postcard please.

I know we are on hard times, but this is a truly great cause, that may affect some of us directly or indirectly as we get into the later years of our lives. Please give what you can spare :-)

As for why I am doing this.

My own father fell to this horrible disease in February 2008 and I cannot express what an awful and devastating illness it is for the sufferer and loved ones around them. Luckily my father receives excellent specialist care 24 hours a day, but many people are not so lucky. I want raise something in gratitude to those who look after my father and those who need care - the statistics speak for themselves.

According to The Alzheimer's Society